The singer herself did not make the journey east but her newly launched clothing line for the Chinese market staged a small runway show amid the booths of garment manufacturers.

Nashville-based Heritage66 launched Swift’s brand last year on JD.com and Alibaba’s Tmall platforms in a bid to capitalize off the singer’s massive popularity in China and counterbalance the proliferation of fake Taylor Swift products flooding the market. Now Heritage66 is hoping retailers, both in China and other countries, will pick up the new brand. 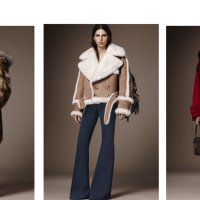