There has been a flourishing of very cool hotels in Istanbul, starting with the latest outpost of Nick Jones’ Soho House. Founded in London in 1995 as an exclusive club for creative types, there are now 13 Soho Houses around the world, some with hotels attached. Jones’s establishment in Turkey’s commercial capital is the result of a four-year restoration of the former US embassy and has five floors of eating and drinking.

Soho House Istanbul is more of a complex than a house, and the venue stretches out over four buildings. Nick Jones and Vicky Charles, who headed up the design, had plenty to work with at the property. Built by a Genoese shipbuilder in 1873, it became the US Embassy in 1906 and thereafter the US Consulate. Restoration work on original frescoes, Carrara marble flooring and rosewood doors have helped bring the swank back in style. 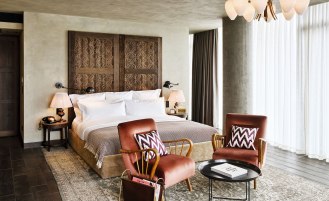 The 19th-century pleasure palace is now complemented by judicious lashings of early 20th-century furniture and futuristic chandeliers.  Part of the club’s accommodation — 28 bedrooms of it — is housed in the former consulate’s annex, two new wings, contained within the Chancery Building and the Glass Building, house the restaurant and the remaining 59 guest rooms, a gym, a 49-seat screening room, alongside a Cowshed spa, a ballroom, and a rooftop pool.

The most atmospheric rooms are in the original palazzo, but all share a common palette of ikat cushions, arabesque tiles and kilims. The star attraction is the rooftop Mandolin Terrace restaurant, which offers stunning views over the city and the Golden Horn.