The British Fashion Council and Georgia May Jagger hosts the opening of a new exhibition, ‘Minnie: Style Icon’, which will be on display at the Soho venue during London Fashion Week. The exhibition of photographs, exploring the character of Disney’s Minnie Mouse and her influence on fashion and pop culture, has been curated with the help of model and photographer, Georgia May Jagger.

The show, a partnership between Disney and the British Fashion Council, explores the character of the stylish mouse and her influence on fashion and pop culture via archive imagery, sketches, celebrity portraits and fashion spreads. It also showcases exclusive photography by model Georgia May Jagger.

Highlights include Herb Ritts’ 1987 shot of Madonna sporting a pair of mouse ears in her Tokyo hotel room; a similarly accessorized Chanel Iman on the back of an elephant for Vogue Germany; and pictures from earlier this year of British fashion designer Ashley William’s Minnie Style collection for Dazed magazine starring Georgia May Jagger – not to mention Jagger’s own snaps of Minnie in a domestic setting.

“I’m really excited to be including my own photographic work, interpreting Minnie’s style and making it more contemporary,” Jagger said. “All my photography is mixed with nature, so we did a blue-tint double exposure; there was no editing; it was all done in camera.” 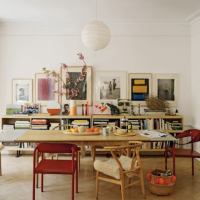